In recognition of these individuals, ORHA instituted the ORHA Hall of Fame as a continuing acknowledgement of the contribution of these exceptional contributors. 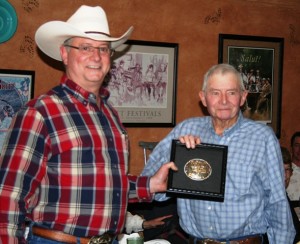 Bill Warne was born in Orange, California on March 18th 1933; to Raymond and Mildred Warne, his family lived in Costa Mesa, where his father worked as a mechanic in a ship yard. Bill’s interests in horses started at an early age while visiting on his Grandfathers farm, at age 10 his Grandfather bought him a donkey and taught him how to break it, after that came his first horse which, with his Grandfathers help, he also broke. In High school Bill got his first quarter horse. While Bill was attending Junior college, Jack Baker, a Good friend of Bills talked Bill into quitting school to Train horses; Bill took his advice, rented a little barn in Costa Mesa, and was launched into a lifetime of involvement in the horse Industry.

On Friday October, 13th 1967 Bill married Kathy Thomas a girl he had known since she was 10 years old. Bill and Kathy moved around and rented different facilities in the area when in 1969 Peacock Hill Stables in Tustin, California, a facility designed for The Peacock Hill Nationals open show a Benefit for the John Tracy clinic, which teaches deaf children to speak,  came up for sale. Bill and Kathy bought it and ran their horse business there for 10 years, and donated the facility yearly to the Peacock hill national horse show, in 1979 they sold Peacock hill, and bought Irvine Park. Two years after that in addition to Irvine Park, Bill and Kathy purchased Peacock Hill Ranch, in Eagle Point, and moved to Oregon in 1981.

Not only has Bill been active as a Judge  and a Breeder, he has been very visible as a competitor, showing horses in many disciplines, including , Reining, Pleasure, Trail, Cutting, Western Riding, and Halter, to name a few. During Bill’s career he has had the opportunity to train and own such Horses as Scanty Pants and Prime Charge both AQHA Champions, Speed Mark, and Remedy’s Reward who earned in excess of $ 40,000 in NCHA Money, also the breeder and current owner of My Smoke N Pistol an NRHA Non-Pro Futurity finalist in 1999. Bill’s exposure and name  in California brought him into contact with John Derek , who Bill sold a horse named Mark Owens for the Television series  ‘’ Frontier Circus “ , Kings Only Coronel , El Gato Uno, the list of horses is seemingly endless.

Present at its inception in 1994, Bill Warne, Debbie Walker and Tom Sorenson to name a few of a small group, founded the new reining organization of Oregon; The Southern Oregon Reining Horse Association. This club eventually became the Oregon Reining Horse Association.  A mainstay of the board of directors, financial supporter, a consistent and tough competitor Bill has helped to make the ORHA what it is today.  Furthermore Bill, his wife Kathy and his family have provided a lifetime of knowledge and experience to the reining horse industry in Oregon so it is only fitting the Bill Warne be the inaugural inductee of the ORHA Hall of Fame.

The Oregon Reining Horse Association is proud to induct Ed & Joan Mayfield into their hall of fame. Ed & Joan were married in Vallejo, Ca on March 25th, 1956. They moved their family to Eagle Point, OR in 1962 and quickly became involved in many of Southern Oregon’s horse activities giving countless hours of their time. They were instrumental in the State of Jefferson Quarter Horse Association serving as officers and organizing events. They were actively involved in the horse industry on many levels including teaching, training, breeding and leadership with both being leaders of the Lake Creek Rancheros. Along with their many accomplishments, Ed has held a judges card in the Paint, Appaloosa, and American Quarter Horse Association. Ed has also held the title of Director in the American Quarter Horse Association and retains the title of Director at Large to this day.

Ed and Joan were avid supporters of the Oregon Reining Horse Association for many years.  They both served on the ORHA’s Board of Directors as well as worked to help run the ORHA’s events. Joan served as the ORHA’s show manager, hospitality provider, and coordinator of events. Her diligence and experience in running many different horse show events greatly influenced the growth of the ORHA into what it is today. Ed played many roles in the organization as well. As judge, scribe, gate keeper, and overall supporter, Ed’s constant presence and leadership was a crucial element in the smooth running of all of the ORHA’s events. The ORHA appreciates and wants to thank both Ed & Joan for their tireless support of the ORHA by inducting them into the ORHA Hall of Fame.